“There is no news, there's the truth of the signal, and then there's the puppet theatre…The Parliament Jesters foist on the somnambulant public.”

The puppet show is sponsored by the PTB [Powers That Be] and brought to you through the bastions of public education [makers of cannon fodder since its' Prussian inception in the 19th century], newspapers and big media, and of course, the needs of the fastest growing sector of our economy, the Wall-mart clerk. They have made you think that the War on Drugs is a success to the point where you'll voluntarily provide bodily fluids so you can get a paycheck, that is then systematically removed through illegal taxation [which you also line up for] and private banking sponsored inflation, which you should believe is good for the economy.

Or even Monty Python’s The Meaning of Life:
Either A: mankind is too easily distracted to bring their own self-actualization into being
Or B: People don’t wear enough hats

“Vee” puts it another way:

“Good evening, London. Allow me first to apologize. I do, like many of you, appreciate the comforts of the everyday routine. The security of the familiar, the tranquility of repetition. I enjoy them as much as any bloke. But in the spirit of commemoration whereby important events of the past usually associated with someone's death or the end of some awful, bloody struggle are celebrated with a nice holiday. I thought we could mark this November the 5th. A day that is, sadly, no longer remembered by taking some time out of our daily lives to sit down and have a little chat. There are, of course, those who do not want us to speak. Even now, orders are being shouted into telephones and men with guns will soon be on their way. 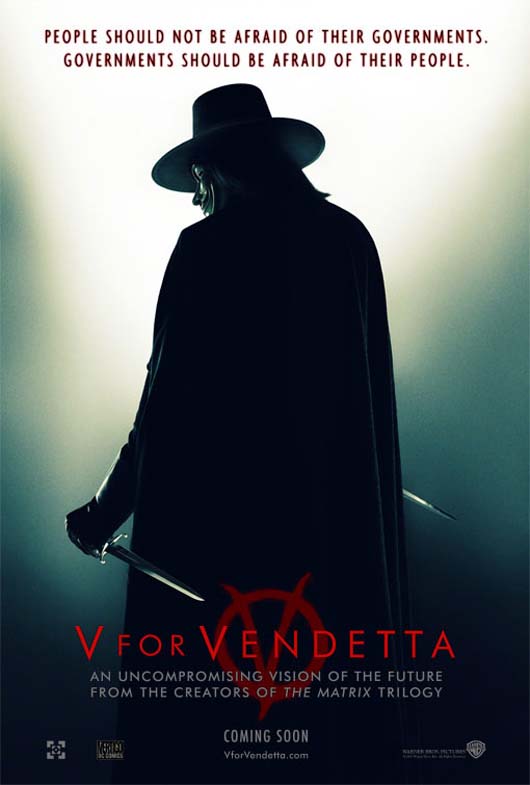 Why? Because while the truncheon may be used in lieu of conversation. Words will always retain their power. Words offer the means to meaning and, for those who will listen, the enunciation of truth. And the truth is there is something terribly wrong with this country, isn't there? Cruelty and injustice, intolerance and oppression. And where once you had the freedom to object to think and speak as you saw fit, you now have censors and systems of Surveillance coercing your conformity and soliciting submission. How did this happen? Who's to blame? Certainly there are those who are more responsible than others and they will be held accountable. But again, truth be told, if you're looking for the guilty you need only look into a mirror.

I know why you did it. I know you were afraid. Who wouldn't be? War, terror, disease. There were a myriad of problems which conspired to corrupt your reason and rob you of your common sense. Fear got the best of you and in your panic, you turned to the now High Chancellor Adam Sutler.

[or patriot act, or department of homeland stupidity or whoever we elected instead of Ron Paul]

More than 400 years ago, a great citizen wished to imbed the 5th of November forever in our memory. His hope was to remind the world that fairness, justice and freedom are more than words. They are perspectives. So if you've seen nothing, if the crimes of this government remain unknown to you then I would suggest that you allow the 5th of November to pass unmarked. But if you see what I see if you feel as I feel, and if you would seek as I seek then I ask you to stand beside me, one year from tonight outside the gates of Parliament and together, we shall give them a 5th of November that shall never, ever be forgot.”

All the media on the planet is owned by just a very few rich, old white guys. [You do know this, right?] Some of their friends own the bank that prints money any time they want to, and will never be audited. Innocent people get sent to jail every day, because the prisons are privately owned, and like the public schools, they get paid, not on results, but on daily head counts.

David Flesher          Death of an American...The Killing of John Singer